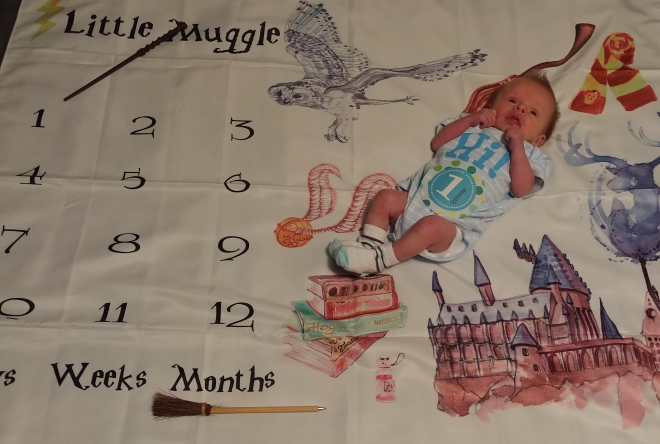 Baby Luke is one month old! I still can’t get enough of him. And he can’t seem to get enough of me or I’d be getting more sleep hahahahaha.

No, but really. A newborn’s first month is no joke. Some nights I get pretty much zero sleep. When he’s cluster feeding, there’s maybe an hour after I first put him down for the night, and then he’s up until 5am wanting to eat and be held. And then other nights he’ll sleep for three hours after each feeding and I’ll get a full night’s rest overall. But of course, I never know what kind of night it’s going to be.

And they tell you, “Sleep when the baby sleeps,” but that is so. Freakin. Hard. I’m not very good at napping anyway, but then I also feel like I need to do things when he’s asleep. Like dishes and laundry. Not to mention the part where I need to eat and shower and, I dunno, go to the bathroom once in a while. I know I can put off the first two things, but I can’t not eat. And it’s next to impossible to eat while he’s attached to me. Even if I could somehow accomplish making my lunch while holding him. So, the napping when he sleeps might be an hour out of the whole day. But I’m adjusting. Some days are a little harder than others, but it’s all worth it.

Each day I try to be better than the day before. It’s easy to get frustrated and overwhelmed. Not gonna lie, I’ve spent a lot of time crying. But it’s getting better. He’s so amazing and makes me so happy that I know I can get through this difficult time. I have to tell myself to relax and breath once in a while, but that’s okay. I’m sure I’m not the only one who has felt like this is too much at times.

As for balancing my work with this new life in the house… It’s been tough. Most days I don’t do much more than read. But I’ve managed to keep up with my weekly posts here and I’ve been able to work on my other projects a little at a time. That’s something else that I feel like I’ll get better at over time. But he’s my number one priority, obviously. So, let this be the warning I guess that there might come a week that there’s no update. I’ll do my best to keep up with all of my goals, just because that’s who I am as a person, but I am also giving myself permission to come up short for a few months. This is my reality, and I have to honor it.